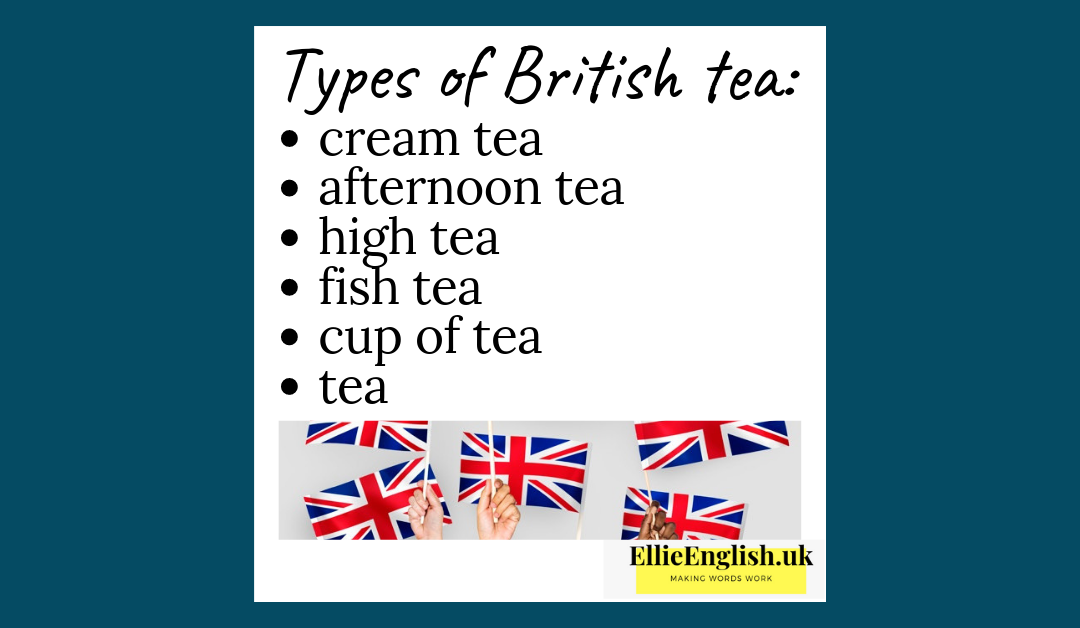 Those of you who know even a small amount about us Brits will know that tea is a national pastime. We eat it, we drink it and it holds us together when times get tough.

Unfortunately though, we can’t quite agree on what it actually means.

The meaning of this word changes depending on:

Cream tea needs both a pot of tea and also scones, cream and jam. There’s much debate about whether the jam goes on the scones first or the cream. Either way, it’s delicious.

This is a pretty posh affair. Afternoon tea is usually taken in an upmarket cafe or restaurant and is not cheap.

Did you notice that I said ‘take afternoon tea’ and not eat or drink? Eating or drinking is far too common for afternoon tea – the very thought!

Afternoon tea includes rounds of very small sandwiches with the crusts cut off (because takers of afternoon tea, as well as not explicitly eating or drinking, cannot be expected to have to chew). There’s cake and scones too and the chefs that make this have trained for years. Eaters of afternoon tea usually sit on soft chairs with a low table, unlike those hard core high tea eaters.

High tea is even more upmarket than afternoon tea. It includes almost the same food as afternoon tea but the important difference is what we sit on when we eat it.

Yes, chairs and tea are linked and high tea needs a full height table to enjoy it properly.

High tea is now only found in old fashioned literature and famous authors such as Enid Blyton, author of The Famous Five series of children’s books would have taken high tea.

Also called fish supper, this is eaten at the end of the day and includes fish, chips, buttered bread and a pot of tea. We eat this at home, usually on the newspaper wrappings it was given in at the chip shop although some posher souls might choose plates. Most commonly heard in Scotland.

This is something we eat. It’s a cross between a scone and a bread bun and contains raisins, dried orange peel and a little bit of sweet spice like cinnamon. My grandma makes a mean tea cake.

In Britain we drink on average 165 million cups of tea a day.

We drink more tea than almost any other country and it’s both a way of quenching thirst and a social symbol of friendship.

Cups of tea can calm difficult situations and replenish you after you’ve been through something difficult. After I’d given birth to my children, one of the first jobs the midwife did (after the more pressing issues of checking the baby was okay) was make me a cup of tea. My house was broken into once and the police officer that came round put my kettle on to make me tea.

Offering someone a cup of tea is more about a symbol of friendship and safety than it is about what you actually drink. Consequently, you might hear something like this:

“Yes please, I’d love one but can I have coffee?”

This makes perfect sense to us!

Ah, simple tea. The most problematic meaning of the word. Tea is both the drink and an evening meal, but only if you live in some parts of the country.

Tea if you’re northern or more working class (this means lower class) is both your evening meal (and you’d eat dinner around noon) and something you drink. If you’re southern or more upper class (unless you’re talking about afternoon tea or high tea), you drink tea.  And just so you know, these speakers would eat lunch around noon and dinner in the early evening.

If someone offers you tea, you need to read the context cues to know exactly what it is you’re being offered.

Southern or upper class offers you tea? It’s a drink – unless you’re in an upmarket restaurant in which case it’s afternoon tea you’re being offered.

Northern or working class? It could be a drink or food.

To decide which, ask yourself the following:

Is it a traditional meal time?

Do you know this person well?

Can you see any sign of any food anywhere?

Are you both busy?

Have you just had an emotional shock?

If you’re panicking at the thought of navigating this tea-related linguistic quagmire, don’t. Tea is always offered in friendship so if you have no clue what type of tea you’re being offered, just ask.

So tell me, what other habits or customs do you know that would confuse even the most resilient of language learners? Tell me in the comments!

"Feeling" and "filling" are a minimal pair. This m

LAW and LOW⁠⁠ ⁠⁠ This is an example of a m

All about Time To Talk. If you have any other ques

Middlesbrough accent. In this live class I speak t

Students in Time to Talk will have the chance to m